Say hello to the fully faired new generation Pulsar set to be unveiled at AutoExpo 2014 probably with the name 200SS. Riot Engine presents what are probably the only images available currently of the Pulsar 200SS without camouflage! Brand Pulsar has a loyal band of followers who as we’ve mentioned in our 200NS Review are very fond of the brand and understand the finer nuances of the Pulsar that are often lost on other motorcycle enthusiasts. This design study of the fully faired Pulsar 200SS comes from one such fan. This design might also be representative of the rumoured Pulsar 375, but let’s assume for now that this beast will be powered by the same mill that powers the 200NS until we have more credible information that a Pulsar 375SS is also on its way!

The previous generation Pulsar went under the scalpel every festive season, yet the tank was a constant. However with the new Pulsar 200 NS, Bajaj chose to sharpen up the tank while retaining the muscular design cues. In the faired variant of the new Pulsar, expect the tank to be the same but with minor changes towards the front end as we have observed from various spy shots. We aren’t exactly sure if this is how it’s going to be, but we think this is pretty close. The primary difference is at the point where the tank meets the perimeter frame. In the 200NS, a good chunk of the lower half is covered by black plastic bits, while here the coloured part of the tank goes all the way to the frame. Mild design changes on the tank.. The new Pulsar’s design language will be characteristically busy. The fairing wraps around the body while sporting a sharp wedge that bulges outward with a plastic insert filling the gap. There’s the equivalent of what one would call the shoulder line in a car, which defines the silhouette of the fully faired Pulsar 200. The fairing is two piece, with the bottom piece screwed onto the piece above. The twin lamp setup up front should be something similar to that we’ve seen on the Pulsar 220. One lamp, a projector type for the low beam, while the other is probably a conventional high beam unit. As most other magazines have, we speculate too that these will probably be borrowed from the distant cousin, the KTM RC390. The conventional setup on the 200NS was a sore point for us and this new projector setup, with the promise of 55W/60W lamps sounds just about perfect.

Will Bajaj pull a TVS? Will the marketing material scream about these LED daytime running lamps? We think the answer is a resounding ‘Yes!’. Still, we hope Bajaj does pull another ‘Pulsar Mania’ for the fully faired Pulsar 200SS, Pulsar Maniacs will have a field day. On a side note, I’ve never liked the term ‘Pulsar Maniacs’. Pulsar Mania was close to perfection, Bajaj should have stopped right there! The new Pulsar 200SS will undoubtedly sport LED tail lamps. The difference though might be in the presentation. While previous Pulsars have sported tail lamp units with white textured glass, the 200SS, from what we could see in the various spy shots, will have a coloured and layered glass with the LEDs embedded inside, not unlike what we’ve seen in the KTM Duke 200. There do seem to be chrome lines to add to the texture. The image above is not the exact representation, but we think, again, it’s pretty close. The turn signals with LEDs will be a straight lift off from the KTM Duke 200. While not immediately obvious, the Pulsar 200SS has a completely new rear cowl. While the silhouette seems to be the same, the design has actually been complete modified to better suit the far more aggressive design language of the new Pulsar. The biggest change here though is, the new Pulsar will lose the Suzuki SV inspired rear tail lamps. The entire unit has been moved to the plastic attachment leaving the rear of the cowl beautifully plain. The side panel with the inset mesh is a constant in any Pulsar and this model, sharpens up the lines and expands the size of the mesh a tad. The side panel also connects various lines on the motorcycle, keeping things in sync.

Goodbye dildo-mirrors from the Pulsar 220! Bajaj has gone conventional with these new fairing mounted mirrors, opting for a nice long stalk instead of those stubby units from their previous attempt at integrating a mirror in a faired motorcycle, well, half faired to be precise. As any Pulsar fan will tell you, if there was one thing that the new 200NS did not do as well as the previous gen, it was the growl. The old Pulsars had chunky, heavy exhaust cans with a note that wasn’t deprived of a healthy bass undertone. The new KTM exhausts functioned phenomenally, but there never was enough drama. Not to get up your hopes or mine, but the new exhaust on the Pulsar 200SS might just fix that niggle. The short stubby unit is rumoured to be an optional extra but we hope its got enough heart to make the prospective customer tick that option.

The exhaust shown here might vary significantly from the actual one. While we are quite sure of the basic structure, we aren’t sure if the silver coloured bits of the exhaust are restricted to the end of the exhaust can. We think the silver eat shield might extend a little more towards the other end of the can.

Did we leave something out?

The handlebars are clip ons as you would expect and should be lower than those on the 200NS but not as low as that on other faired motorcycles. The added weight of the fairing in conjunction with the exhaust on on side of the motorcycle should affect the handling, if Bajaj has not gone to the trouble of altering the steering geometry. What flavour would you want your Pulsar in? Finicky and sharp to change direction? Or one that’s extremely stable in crosswinds on the highway, but stubborn as a mule at the corners?

The Pulsar 200SS or whatever it may be called has spent quite some time testing all over the country. The launch was expected in November 2013, but that did not materialize, neither did the December 2013 launch. January 2014 will be gone in the blink of an eye and the only possible explanation seems to be that Bajaj wants to steal the limelight at the AutoExpo 2014. Shyam Sundar Narayan, Marketing Manager, Two Wheelers, Bajaj Auto Ltd., speaking to The Hindu Business Line at a promotional event spoke at length of the ‘sport’ and ‘supersport’ segments and said that Bajaj intends to unveil two to three models at the Expo with the launch of at least one Pulsar slated for later in the year. It isn’t far fetched to dream of a fully faired Pulsar with the heart of the KTM Duke 390, let’s show some restraint until the said launches are indicated to be in the ‘supersports’ segment.

Considering the Pulsar 200NS retails somewhere just below the Rs. 1 Lakh mark, expect the 200SS to nudge past that mark. The deciding factor would be the presence of fuel injection and ABS. We’ve seen test mules sporting ABS equipment and also mules without ABS. If Bajaj starts offering optional equipment like the exhaust, it shouldn’t surprise us if ABS is also offered as an optional equipment. Fuel injection has been something that Bajaj dabbled with yet abandoned prematurely the favour of less expensive carburetted version. The thing though is, the market is different now. Consumers are ready to plonk their cash upward of Rs. 1.2 Lakhs without as much as a blink, as long the product is exciting. Considering how all automotive news portal servers go down during a Pulsar launch, we think this pending launch should also be tagged ‘exciting’.

A Gallery of all the images here. Just so you can sit and click through the images in loop and waste away your week! 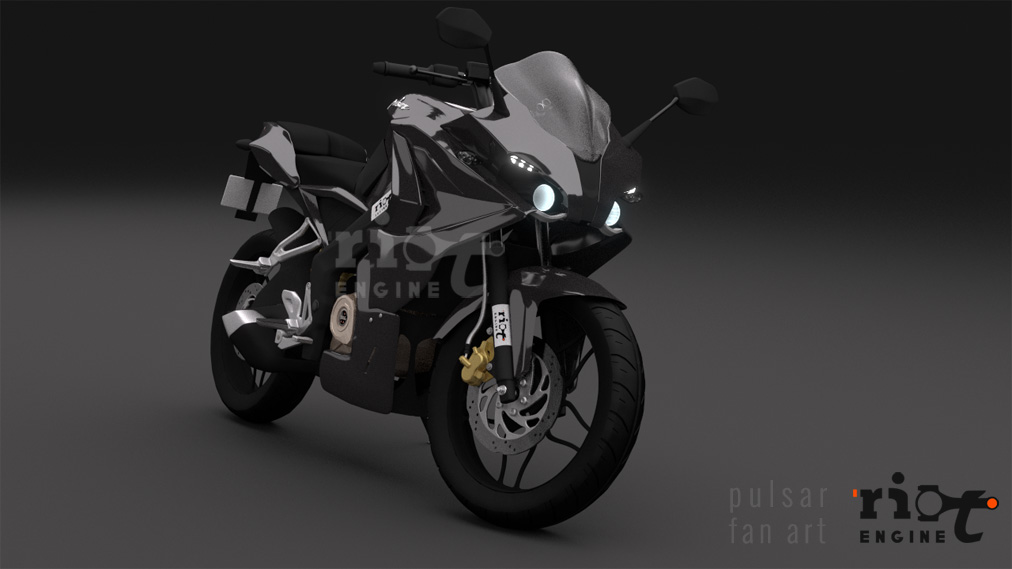 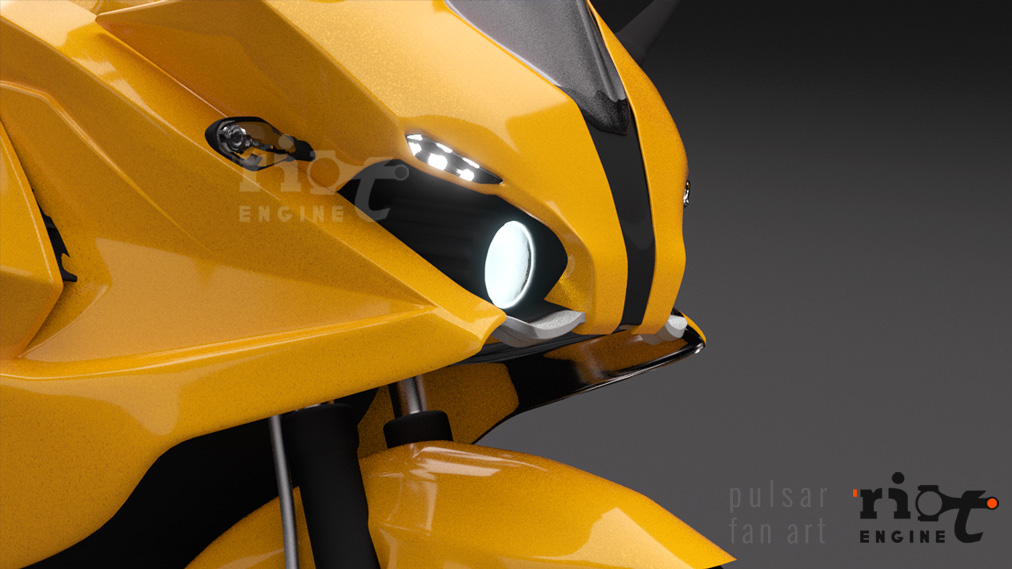 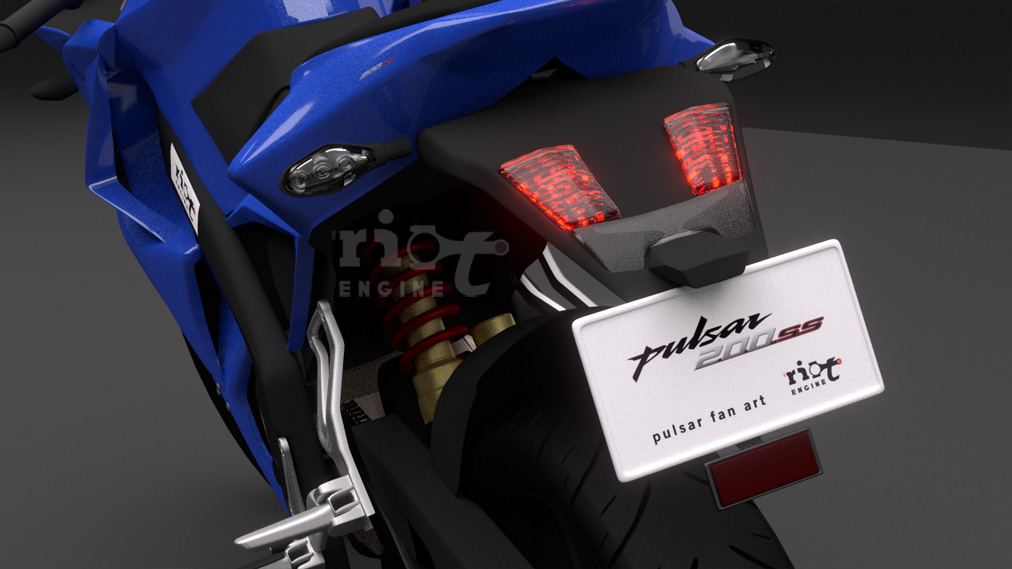 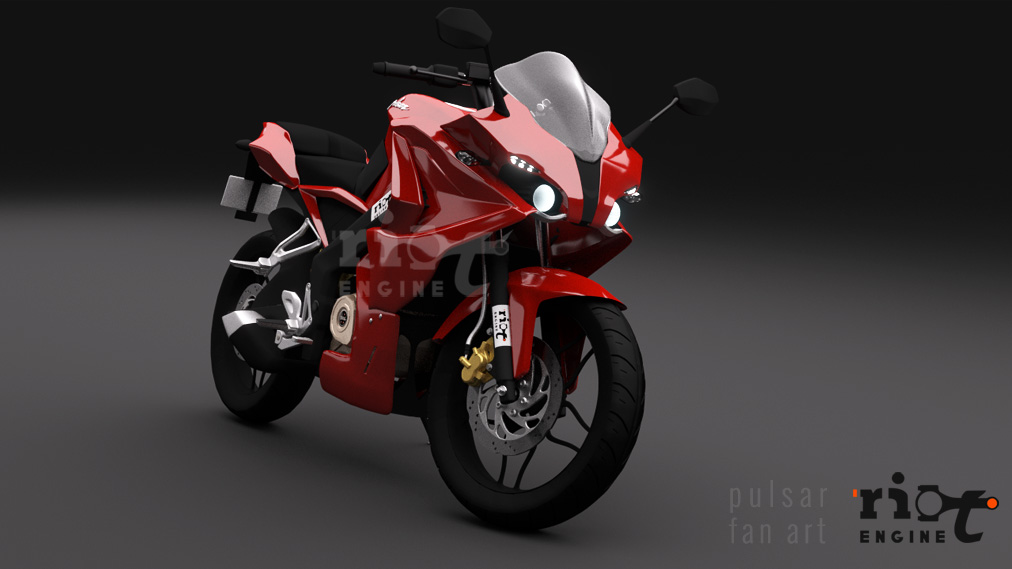 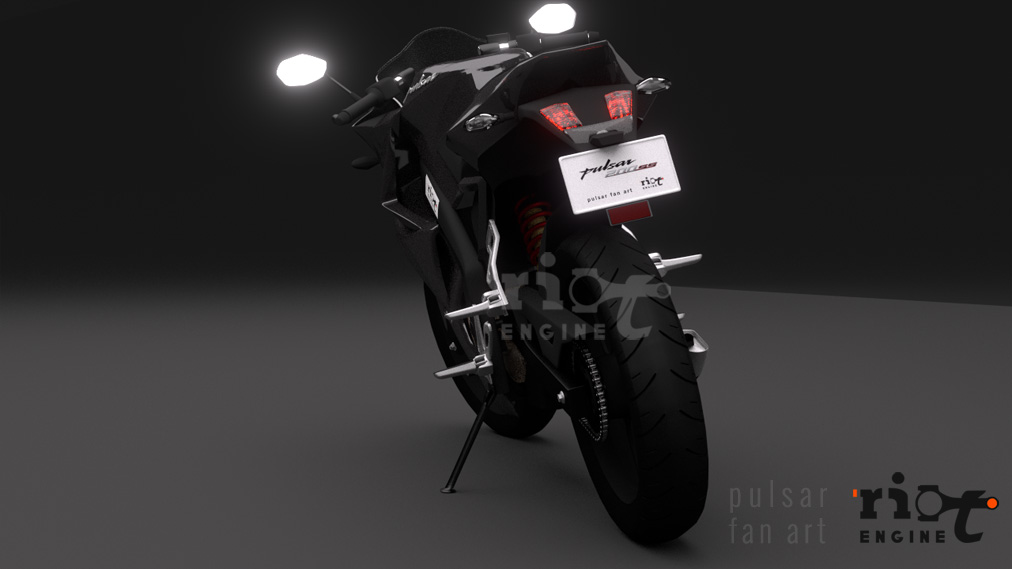 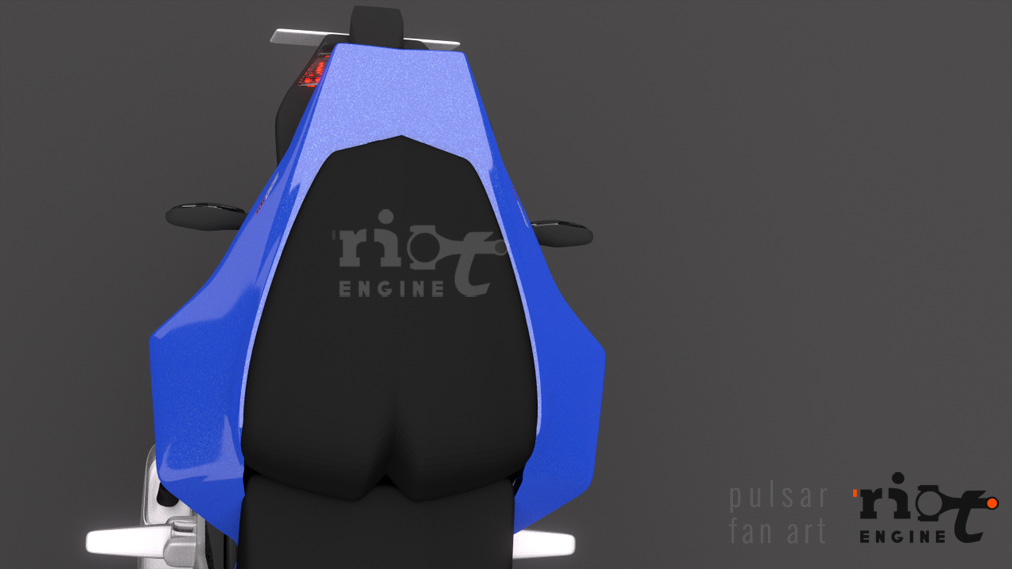 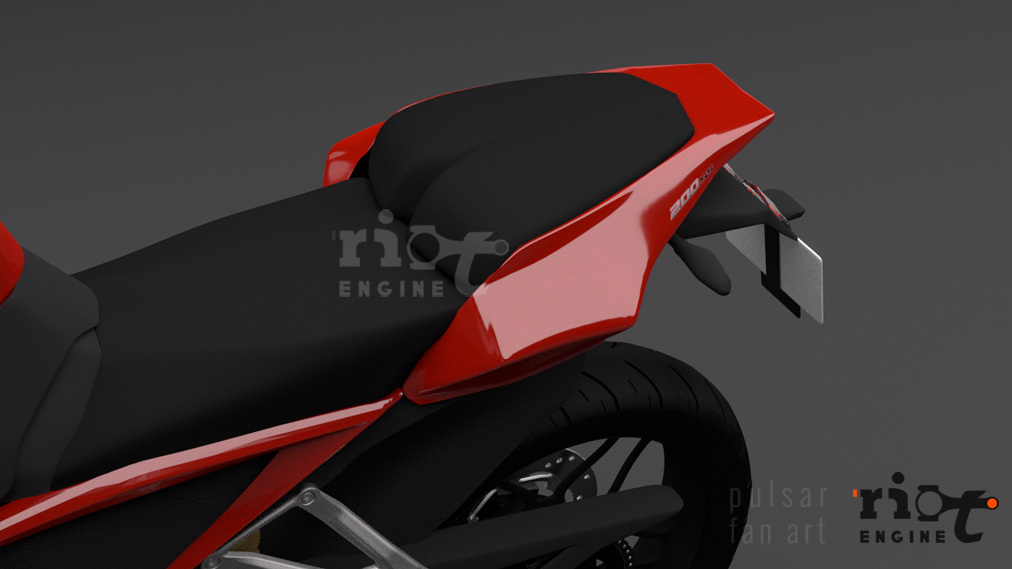 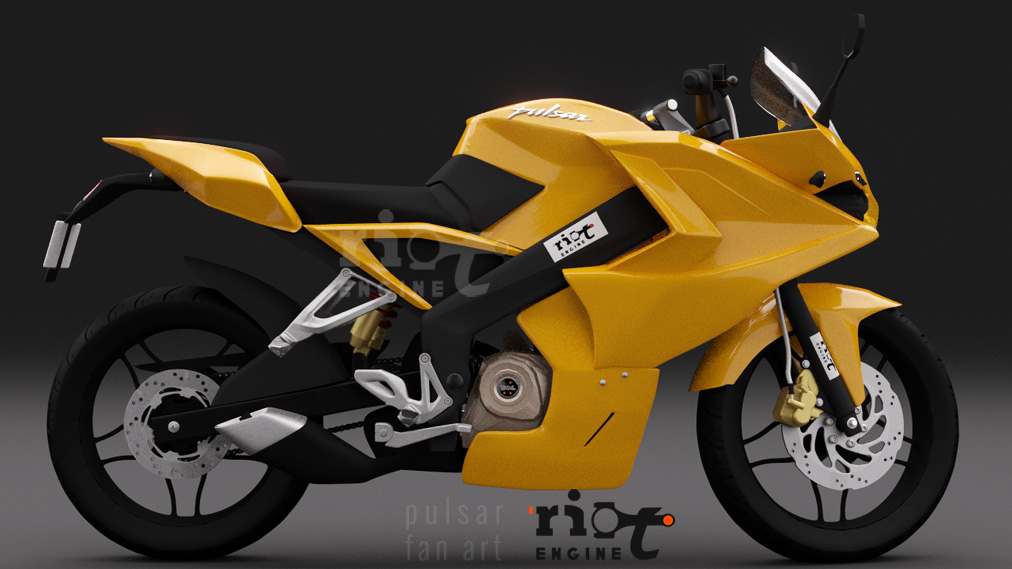 We would love to hear from you! Alas, we are yet to figure out a commenting system that doesn’t suck. Until then, we would love to see your comments at the related post on our Facebook page or Google+ page. You can always tweet us at @riotengine